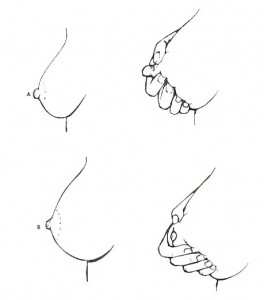 At the base of your nipple, where your nipple meets your areola, place your thumb and index finger. Press in gently but firmly about an inch behind your nipple. As breasts are unique, it is common to have variation in nipple’s and their elasticity from one breast to the other. So, you could have one nipple that is flat and one that is truly inverted (as an example).

How much the nipple is inverted can vary greatly, from a nipple that doesn’t protrude at all when stimulated but can be manually pulled out, to a nipple that responds to compressions by disappearing completely.

If your nipple protrudes at all you don’t have an inverted nipple. If you have a truly inverted nipple it will not protrude. This is caused by adhesions at the base of the nipple that bind the skin to the underlying tissue.

The Hoffman Technique can be helpful to break up adhesions and make it easier for the nipple to stretch more comfortably. It is done manually by placing the thumbs of both hands opposite each other at the base of the nipple and gently but firmly pulling the thumbs away from each other. Do this up and down and sideways. Start by doing this two times a day, then work up to five times a day. You can start during pregnancy and continue after your baby is born to help draw the nipple out.

*You can also incorporate nipple play with your partner during pregnancy to help draw it out.